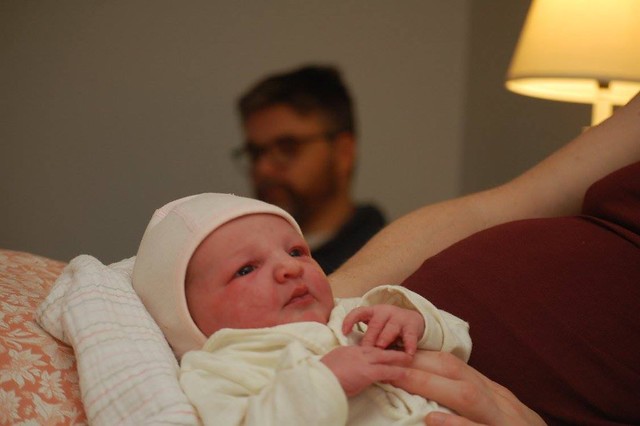 Named almost the moment she was born, a first for Ryan and Danica. “It’s a girl!”, her daddy exclaimed, and almost with the next breath, “Cecily! I knew it was Cecily!”

Little knowings. I just love those God whispers that become resonating shouts when our eyes fully see. That’s who this little girl was to her daddy, and what a special thing for her to know, for him to remember. 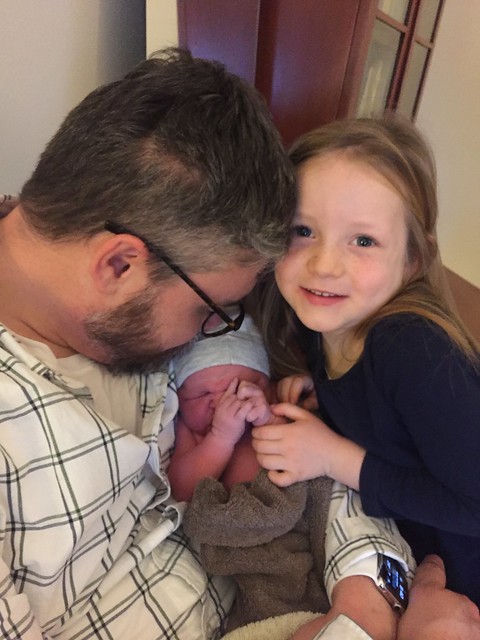 She was born in her own time, like both sisters before her. Nine days past her due date — dates which I always laughed and shrugged off, but after Fiona waited until the 11th hour for her arrival, those pesky little due dates suddenly seemed to bear much more weight in my mind. As soon as that due date passed, the clock began to tick. I tried hard not to notice or hear it or give it any mind, but I did. Please don’t be too late, please please! One week overdue, and suddenly I entered that end game — you know, when walking feels awkward and getting out of bed demands an actual strategy and I just couldn’t bear the thought of real clothes. All activity happened in the morning, because afternoon naps were guarded. I seem to only ever birth babies at night, you know, so naps aren’t an option. Last batches of cookies. Last grocery runs. On the 16th, I even put on make up and a dress and did my last stocking purchases, realizing my stash for Ryan was lacking. It was warm, even balmy, that week, so we would walk down to my parent’s, to the library, slowly and awkwardly, but we did it.

“Any contractions?,” my midwife asked every week, and yes. Yes, plenty of those. But nothing real. A few nights, laying in bed, I would be woken by a couple in a row — and there is nothing quite so disappointing as realizing 6 hours later that you’ve been sound asleep and those false alarms completely fizzled out.

I didn’t really want to go into labor. I felt so much less prepared than ever. What if this time it got the better of me? What if I just lost it halfway through and couldn’t do it? I actually don’t like the feeling of a small human exiting my body.

And the whole time trying not to notice that my window of time was slipping away, day after day, with no sign of labor.

I forget that it truly does suddenly overtake you. There is no warning. It happens when it happens. I really forget. Kind of silly!

Friday the 18th: I woke up exhausted, thanks to the worst heartburn of my pregnancy the night before. Fortunately I was able to fight that exhaustion with the breakfast of champions: Christmas cookies and Dutch pastry, still on a tray from the night before when the kids slept under the tree. We’d finished our Christmas read-aloud and nibbled cookies and washed it down with milk. We’d sung Christmas carols with four excited kiddos, then put the girls to bed while the boys relished this special evening by the tree with Mama sitting nearby. That was the night before, and now I had to put a plan together for another day. Plan A was always Have A Baby, but since that didn’t seem to work out, I was left to scramble for a Plan B. Along with usual chores, the plan for Friday included cinnamon rolls for Christmas morning and a game of Sorry altogether after my very short nap. We were all hoping to spend the evening shopping for each other’s Christmas Eve gifts (the kids swap names and buy each other something.) Around 5, we put away the game and I started to get dinner ready, just in case Daddy ended up being available. I wrapped my risen cinnamon rolls for the freezer, and felt the first contraction. It wanted my attention, but I stubbornly paid it no mind. I pulled out bread for pb&j, and the boys groaned. “We ate that for lunch!” I wanted to snap at them in response, and that got my attention. My, aren’t we edgy tonight, I chided myself, and bit my tongue. Something about “an easy dinner so we can meet Dad in town,” and they quickly changed their attitudes. 6:30, we met Ryan and he joined us in the van. “This might need to be an efficient trip, babe. I could be in labor.”

I waddled into the store and managed to keep up with two excited boys. The contractions sure felt legit. By the time we got back in the van, I was already tuning out the world. Ryan asked if this was really it. Ugh. I hate having to make that call! We called Regina, my midwife, and told her we’d be in touch again at 9:30, after I’d gotten home and settled, to let her know if things were continuing to move forward.

And they were. Every six minutes, for about 6 hours! I have never had early labor last so long. After Regina and several friends had arrived, and my vitals were all checked, I laid down on the couch and fell asleep. For nearly two hours! A few times I was slightly roused by a contraction, but when I woke up at 2:30am, I had a sinking feeling.

It was a false alarm.

I felt groggy and grumpy. So I pulled out the mountain of clean laundry and started folding. I’m not sure I contributed much to that chore, because sure enough, as soon as I was up and moving, everything kicked back into action. Oh me of little faith. It wasn’t a false alarm; it was the pause I needed to get the rest and stamina for the rest of the night.

Slow and steady: that’s how it started, and that’s how it progressed. Up until the end, I felt like I was laboring in slow motion. (I even remember making a joke about not ruining my slippers right before I started pushing. I’ve never been able to think or talk much during other labors!) A contraction, then that suspended time in between when you lay your head on the kitchen counter and sleep. Squat. Stretch your lower back. Sit on the couch. Hate the couch. Try the chair. Have to move. Get a glass of water, but pause halfway through the filling to breathe. Resume. Take a sip and then breathe through another. It’s amazing how many hours can slip by when you are living in those seconds and moments. My mom slept in an armchair. Friends checked instagram and laughingly complained that no one was updating at 4am. Ryan slept with the girls for a couple hours. The house was a bubble of calm and timelessness. 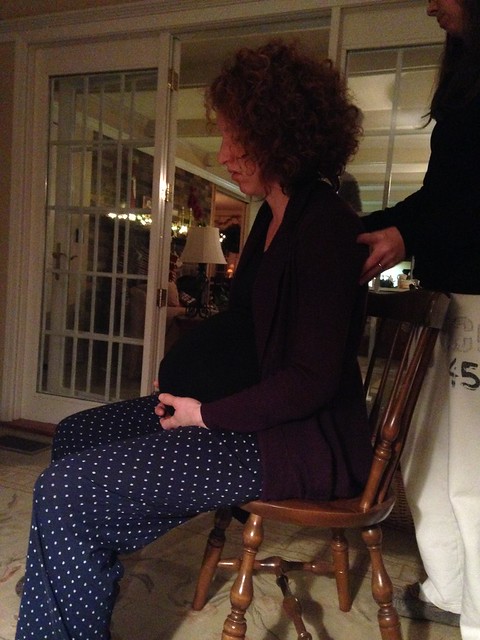 I think it was around 5am when I finally was feeling too tired and too uncomfortable to stay in the kitchen or family room. I wanted my bed.

I perched on the edge of the mattress. It was getting real. No one could push too hard on my lower back. I was vaguely aware of the time and knew this was lasting awhile (for me), but I also could tell that it was moving along just fine. There were no hours of stalling, as there had seemed to be with Fiona. There was the steady, aching awareness that this baby was moving. Pressing on bones, pushing them aside. Come on, body, get this baby down! 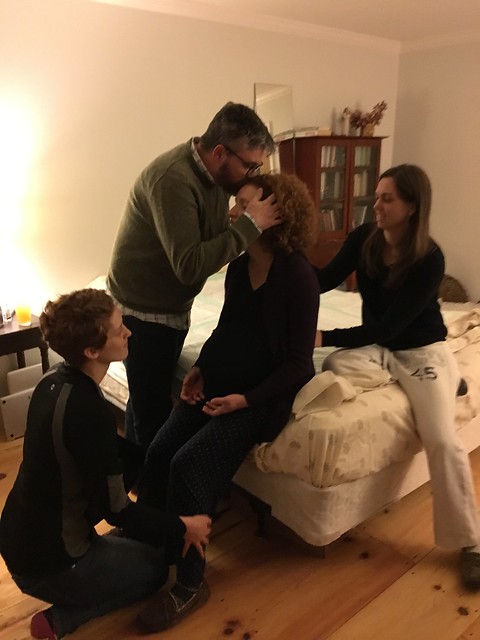 I was exhausted. I would sit or stand for a few contractions, and then lay down for a couple. My legs just couldn’t hold up. But they needed to, because I wanted this done. Kids woke up and asked to play wii; it was morning. I was waiting for the pressure that would cue pushing, but knew this time, I needed to help. Get up one more time. I sat on the edge of the bed — as far as I could get before the next wave hit (those crazy piggyback contractions with barely a breather that are oh so hard but they get things done.) My water broke. Soon. I stood, or, rather, Ryan held me up. Time to push, at last — and fighting inner waves of panic that this time I wouldn’t know what to do. There was the sudden quiet, intense hustle of assistants manning their positions, birth team in place, eyes on Regina. Except then there’s that grand lull. It seemed to last too long. Is my body going to push this baby out or not??! When the next contraction came, and with it the involuntary first real push, I was flooded with relief. It was going to happen. My body still worked! And efficiently. Only a few of those powerful pushing contractions.

It seemed an eternity of panting before that head was delivered, but Regina talked me through it, flawlessly, again. And seconds later, at 8:01am, born.

I was so surprised. They laid her on my chest, damp and purple and screaming, her face looking like maybe this had been a long night for her, too! A precious new life, healthy and kept through the wild ride of childbirth. And me, too — exhausted and ravenous, but strong. Stronger than ever. An answer to my prayers, and to Ryan’s, too.

Her Nana dressed her and swaddled her and laid her in my arms — another sweet-smelling gift from a good heavenly Father. Another wave of love filling my heart. Another chance to take in the scent of brand new baby, laugh at the bubbling joy of older siblings, count tiny toes so perfectly formed, kiss fingers curled around my pinky, sleep all night with a bundle just meant for a mama’s arms. A chance to know a whole new person. Sacred. Miraculous. 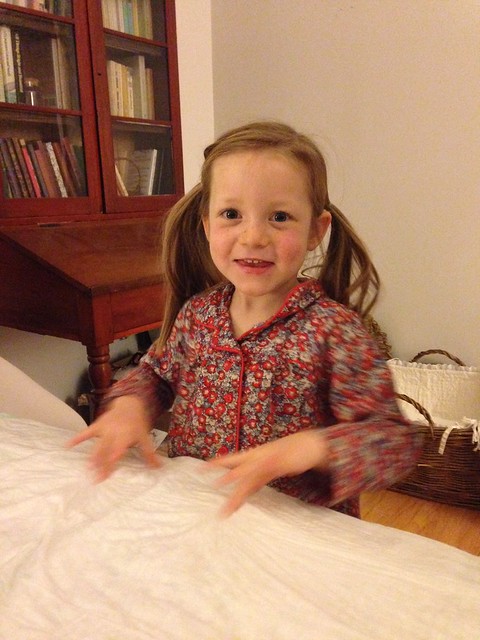 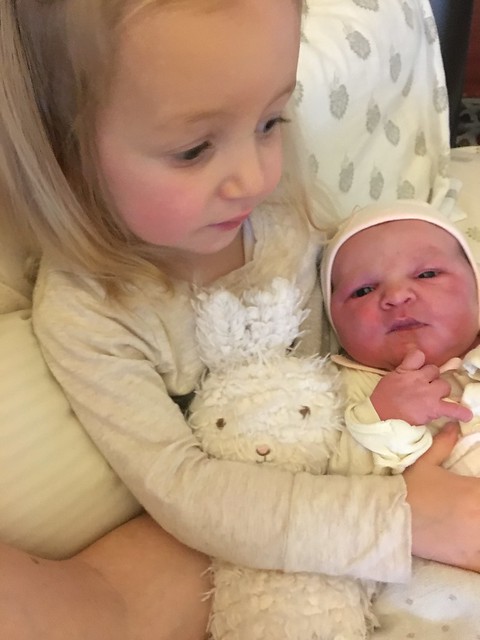 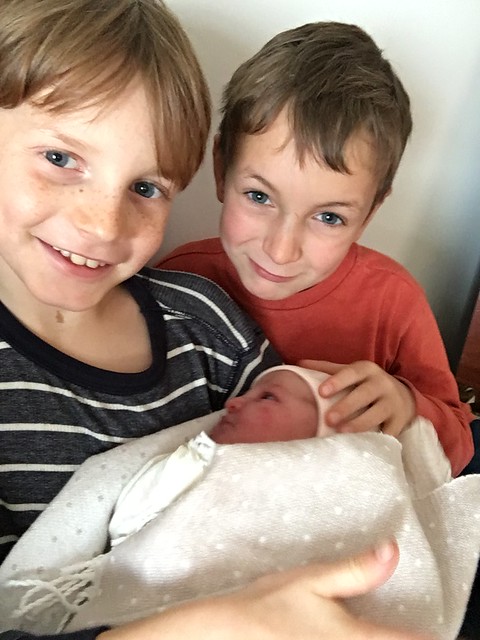 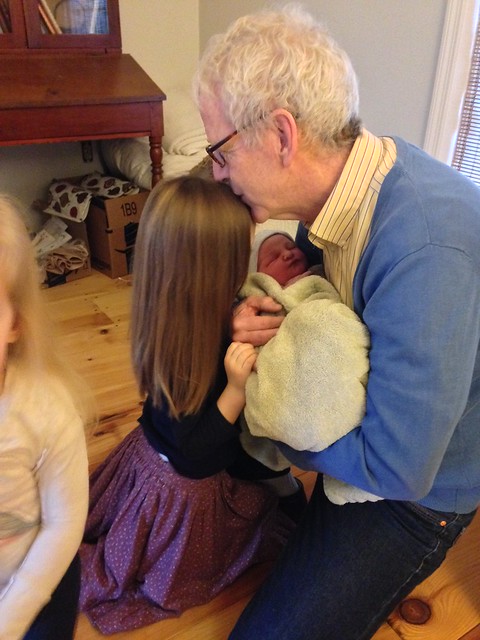 Cecily Anne Dunphey: Cecily, a long-loved name, Anne, a family name on both sides. It means “Blind, Full of Grace,” a combination that immediately reminded me of the hymn Ryan sings to the kids whenever he puts them to bed.

“Amazing grace, how sweet the sound
That saved a wretch like me!
I once was lost, but now am found
‘Twas blind, but now I see.” 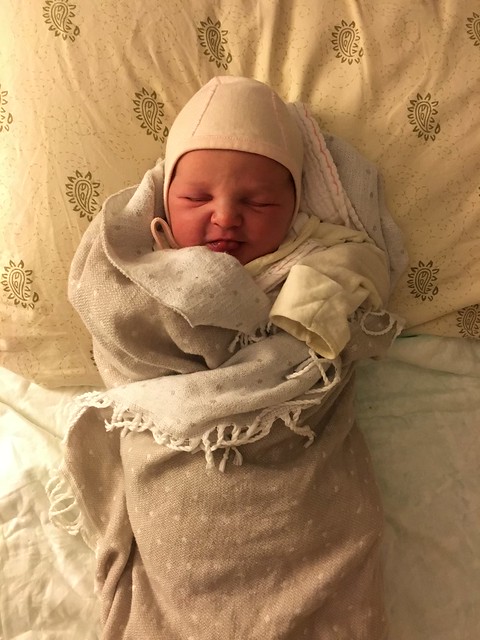