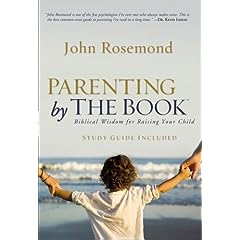 The second is this, Parenting by the Book (“the Book” being the Bible.)

Once I started this, I couldn’t put it down. It was one of the most refreshing perspectives on parenting I’ve read in a long time. An accomplished child psychologist who got saved after having spent his entire life devoted to family psychology, John Rosemond dispels myth after myth of humanistic modern parenting. He reminds us that only two or three generations ago, people’s ideas on children were largely formed by a biblical perspective — and their expectations for what parenting would be like, and for how children would turn out, were radically different than what we currently see.

He pointed out near the beginning of the book that “the raising of a child, once a fairly straightforward, commonsense affair, has become the single most stressful thing a woman will do in her lifetime.” That’s not the way God planned it, “but then, God’s way is not modern psychology’s way, either.”

For several weeks before getting this book, I’d been sort of haunted by the suspicion that somehow parenting — what was to me becoming a behemoth, complex task threatening to overtake my sanity — used to be simpler. More straightforward.

And then I read this:

Mothers today are among the most stressed out “professionals” in the world — worried, frazzled, pressured, unsure, and jumping through continual hoops.

That hasn’t always been the case. It used to be that non-college educated women, without the help of a single book written by someone with a Ph.D at the end of their name, used to raise respectful, hard-working, God-fearing children — and they did it without the task consuming the entirety of their mental, emotional, and physical reserves.

Goodness. Don’t you want to get back to that?

This book helped so much to reinforce the simple, clear goals of biblical child-rearing that I’ve learned from my parents — but that get so continually eroded by the parenting-trend-following mommies all around me.

My favorite part: His chapters on self-esteem, what a totally unbiblical concept that is, and how much destruction it brings.

My least favorite part: His rather lousy exposition in the last chapters on discipline. He should just state his opinions without trying to be an expert theologian. I think. ;)

6 Comments → books: parenting by the book